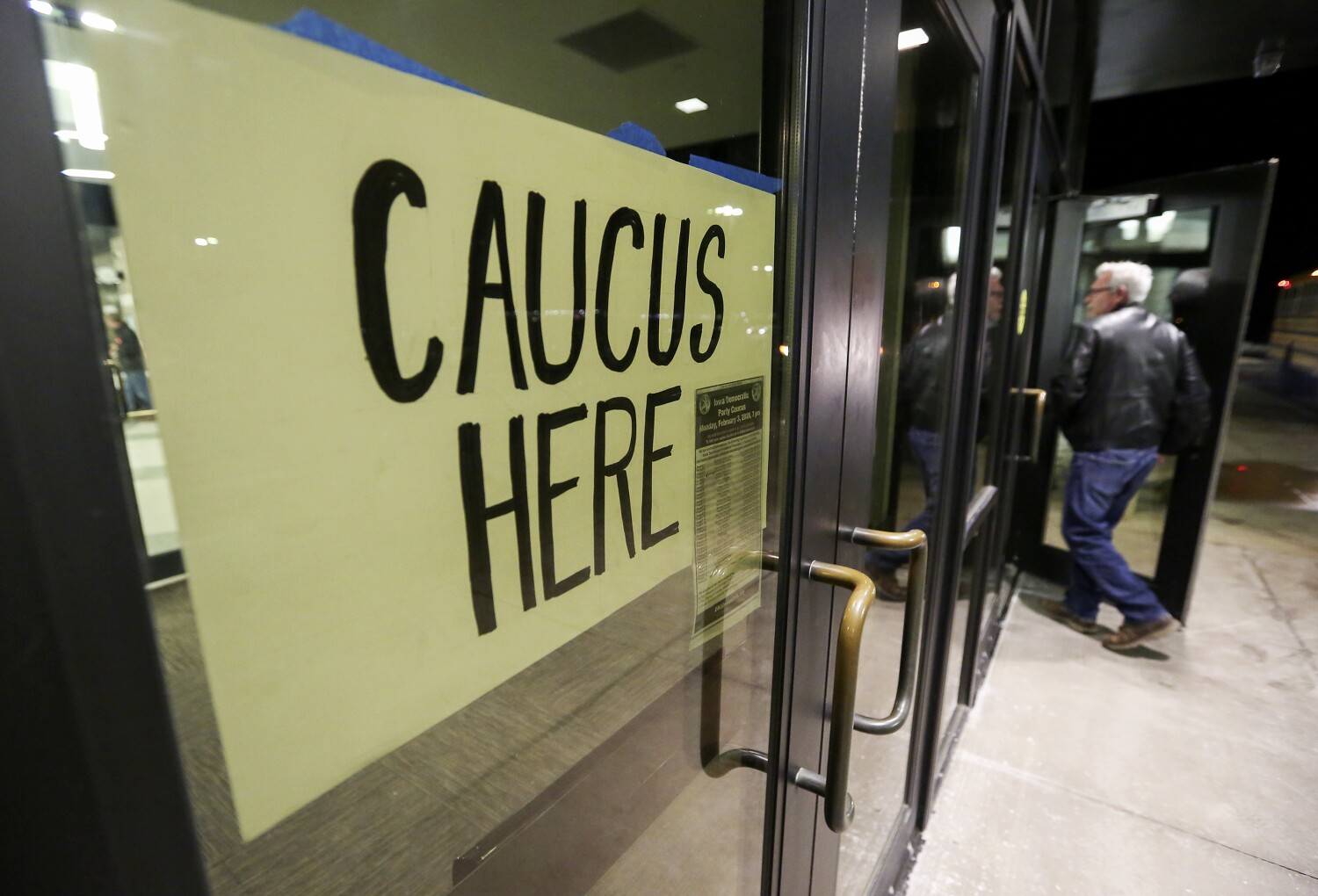 On a tense, chaotic night, with the eyes of the nation trained on the Iowa caucuses, that state’s Democratic Party was counting on a new smartphone app to make everything go smoothly.

In 2016, for the first time, precinct chairs used a smartphone app built by Microsoft to relay results to party headquarters, enabling faster reporting than communicating via telephone hotline. This year, with the state party promising to disclose more granular data than in the past, the job of coding the app went to a fledgling tech firm run by veterans of Hillary Clinton’s presidential campaign.

It turned out to be a crushing failure.

Throughout the long night, precinct chairs found themselves unable to get the app to work. Many never figured out how to download or install it in the first place. Those who tried to report their results via a backup phone line wound up on hold, sometimes for more than an hour.

After blaming the delay on “inconsistencies in the reporting of three sets of results,” it wasn’t until well into Tuesday afternoon that the Iowa Democratic Party was confident enough in the accuracy of its figures to begin releasing partial results, drawing complaints that the process had been rendered unfair — the front-running candidates robbed of their rightful momentum, the underperformers able to hide their weakness. And all because of an app that disrupted what it was meant to streamline.

The firm behind the app, Shadow Inc., took responsibility in a series of tweets Tuesday.

“We sincerely regret the delay in the reporting of the results of last night’s Iowa caucuses and the uncertainty it has caused to the candidates, their campaigns, and Democratic caucus-goers,” the company said, adding that “the underlying data and collection process via Shadow’s mobile caucus app was sound and accurate, but our process to transmit that caucus results data generated via the app to the [Iowa Democratic Party] was not.”

“We feel really terrible,” Shadow Chief Executive Gerard Niemira told Bloomberg in an interview Tuesday. He blamed the breakdown on a bug in the app’s code, which he said had been discovered and fixed by 10 p.m. But by then, the damage was done.

Shadow started out as Groundbase, a tech developer co-founded by Niemira and Krista Davis, who worked for the tech team on Clinton’s campaign for the 2016 Democratic nomination. In January 2019, it was acquired by ACRONYM, a Democratic nonprofit founded in 2017 “to educate, inspire, register, and mobilize voters,” according to its website. ACRONYM’s founder and CEO is Tara McGowan, a former journalist and digital producer with President Obama’s 2012 presidential campaign.

Niemira had previously worked at kiva.org, a San Francisco nonprofit that makes loans to entrepreneurs and others in the developing world, and Davis had spent eight years as an engineer at Google. Shadow’s chief operating officer, James Hickey, also worked in engineering for Clinton’s campaign.

“When a light is shining, Shadows are a constant companion,” its website says. “We see ourselves as building a long-term, side-by-side ‘Shadow’ of tech infrastructure to the Democratic Party and the progressive community at large.”

The company’s main products, according to its website, are a peer-to-peer messaging tool that helps campaigns send text messages to potential voters and a campaign data integration tool. Among Shadow’s larger clients is Pete Buttegieg’s presidential campaign, which paid $42,500 to the firm in July 2019 for “software rights and subscriptions,” according to public disclosures. A Buttegieg spokesperson said that fee was for the text-messaging tool.

In the days leading up to caucus night, Shadow’s app was seen as “a potential target for early election interference,” according to the Des Moines Register.

Those fears didn’t materialize, according to the Iowa Democratic Party. “This is simply a reporting issue, the app did not go down and this is not a hack or an intrusion,” communications director Mandy McClure said in a statement Monday night. “The underlying data and paper trail is sound and will simply take time to further report the results.”

But other warning signs before the caucus hinted at the problems ahead, said John Grennan, co-chairman of Iowa’s Poweshiek County Democratic Party. The lack of opportunities to train on the app in advance did not bode well, he said.

“We were supposed to be getting invitations to use it. The invites would never arrive,” he said. “A lot of people didn’t even load the app because it’s such a pain.”

When the big night came, Grennan, who was running the caucus site at Grinnell College, said he couldn’t tell whether the results he input transmitted properly.

“I kept getting kicked off,” Grennan said. He said he called the party’s hotline with a question, but gave up after nearly half an hour on hold. “I’m 90% sure it went through [on the app]. I’ll have to work under the assumption that if it’s not there, they’re going to call me.”

Ultimately, only one-quarter of precinct chairs were able to upload results successfully via the app, Bloomberg reported.

Shadow and its co-founders did not reply to emails seeking comment. ACRONYM appeared to distance itself from the company, describing itself late Monday as a hands-off investor and scrubbing mentions of the January acquisition and launch from its site.

The Iowa Democratic Party did not respond to questions about why it chose Shadow to build the caucus-reporting app.

Nevada’s Democratic Party planned to use Shadow’s app for its upcoming Feb. 22 caucus, but Chair William McCurdy II said Tuesday that his organization “will not be employing the same app or vendor used in the Iowa caucus. We had already developed a series of backups and redundant reporting systems, and are currently evaluating the best path forward.”

Shadow was reportedly cobbled together in two months, with the Iowa and Nevada state Democratic parties each paying around $60,000, a fee several civic tech experts called low.

It was not evaluated by the Department of Homeland Security, which offers free assistance to state and local election officials and authorities to help improve the cyber security of their election systems through the Cybersecurity and Infrastructure Security Agency, which was established in 2018.

Rodrigo Bijou, a security researcher at Sensent, said a two-month development timeframe “sounds kind of insane, especially considering that user testing and a well-planned rollout would be critical for the app to succeed in a caucus format.”

This is not the first snafu the Iowa Democratic Party has run into this election cycle. The party planned to roll out for the first time “virtual caucuses” — a tool for voters who could not attend in person. The plan was dropped in August after the Democratic National Committee raised security concerns.

For a lower price, the party could have staffed phone banks instead of commissioning a mobile system, which is a “security nightmare,” said Douglas Jones, an associate professor of computer science at the University of Iowa, who has studied election security and also served as co-chair of a precinct in the Iowa caucuses four years ago. Telephoning in results works fine, he said, even if it’s slightly slower.

“It was low-tech but it was reliable” he said “[The app] doesn’t sound like it was cost-effective. I can buy a lot of temp workers and phone lines for $60,000.”

Marian K. Schneider, president of Verified Voting, a nonpartisan election integrity organization, pointed to a decidedly low-tech choice made in Iowa that might prove vital: tallying votes on paper as well.

“The chairs have the actual results recorded. They’re preserved and can be aggregated from those records. That’s a good thing,” Schneider said. “It’s OK that we take the time to get it right.”