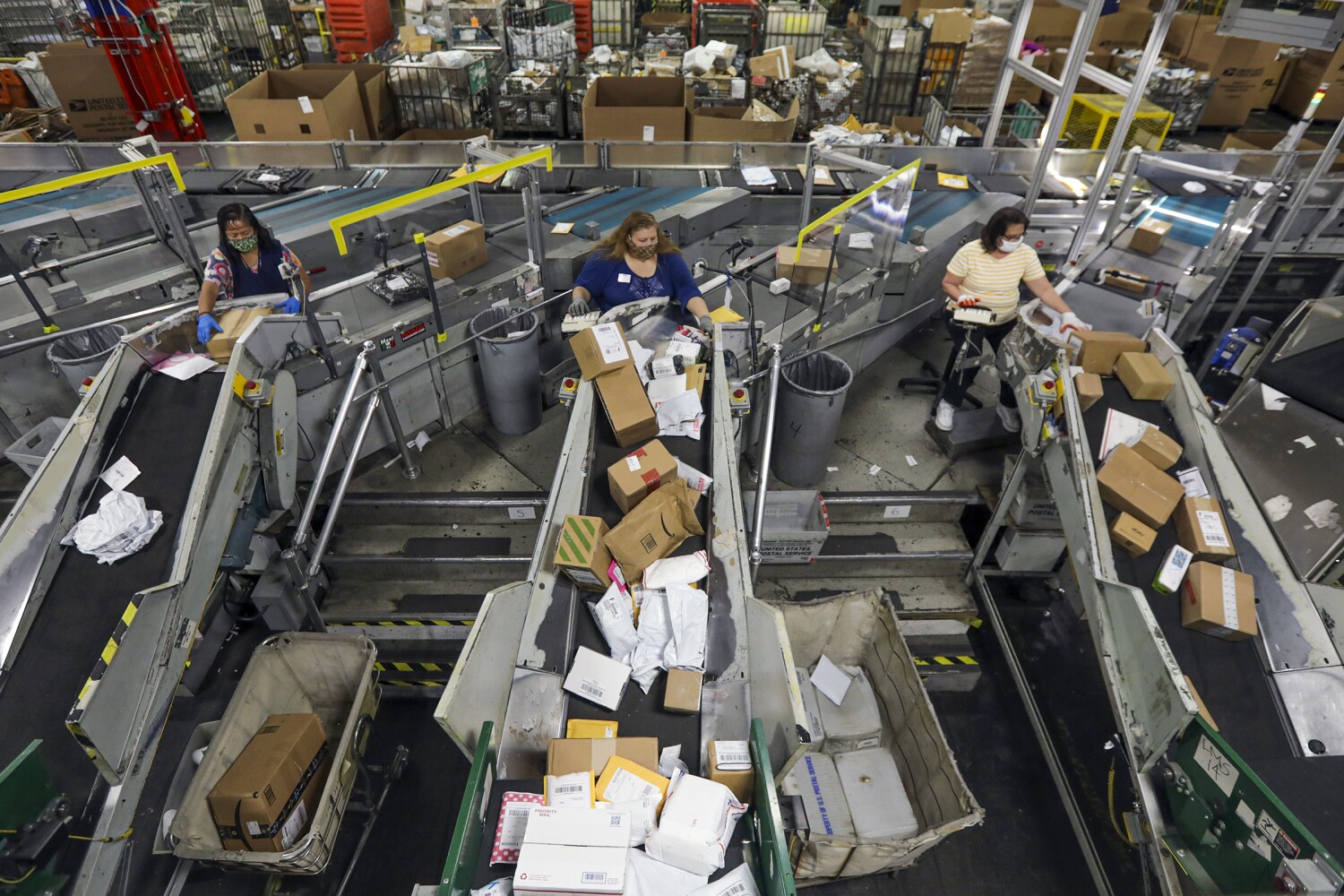 The U.S. Postal Service must prioritize election mail and immediately reverse changes that resulted in widespread delays in California and several other states, a federal judge ruled Monday.

The nationwide order is the latest rejection of efforts by Louis DeJoy, the postmaster general, to cut costs by instituting reforms that snarled the mail system and caused delays in the delivery of medication, unemployment checks and other essential items.

The judge’s ruling came as part of a lawsuit by attorneys general for the District of Columbia and six states including California that accused the Trump administration of undermining the Postal Service by decommissioning high-speed mail-sorting machines, curtailing overtime and mandating that trucks run on time, which led to backlogs because mail was left behind.

“The court has spoken. It’s time for President Trump to follow the law and stop interfering with our mail,” said Xavier Becerra, California’s attorney general, in a statement on Monday. “Our elections — and the health and livelihood of American families — depend on it. This is a major victory for the rule of law and protecting our right to vote.”

The preliminary injunction imposed by Judge Gerald A. McHugh of the Eastern District of Pennsylvania temporarily bars the Postal Service from mandating that mail trucks and carriers leave exactly on time. It also says the organization must allow overtime around the election and suspend the removal of mail-sorting machines until after Nov. 3, among other measures.

The Postal Service’s “ability to fulfill its mission during a presidential election taking place in the midst of a public health crisis is vital. The record in this case strongly supports the conclusion that irreparable harm will result unless its ability to operate is assured,” McHugh wrote in a memorandum supporting his order.

The ruling is the latest by federal judges that reverse DeJoy’s changes. Judges in New York, Washington state and the District of Columbia ordered the Postal Service over the last two weeks to restore operations in the organization, including treating election mail as first-class mail and allowing for the processing of all the day’s mail, even if it means trucks are a few minutes late.

The lawsuit involving California alleged that the Postal Service made numerous operational changes without getting the required approval from the Postal Regulatory Commission.

It was the directive that trucks run on time — not the removal of more than 700 sorting machines — that contributed to significant delays in the mail, the Los Angeles Times reported. The backups caused food to rot and animals to die inside packages that were piling up inside processing plants in California over the summer.

The Postal Service has said in recent weeks that the trucking reforms were not strict mandates but were efforts to encourage more timeliness and mitigate the need for extra trips.

“This effort does not mean that mail should be left behind, but rather that processing schedules should align with transportation schedules. Moreover, the Postmaster General has not banned the use of late or extra trips; when operationally required, late or extra trips are permitted,” Postal Service spokesman David Partenheimer said in a statement last week.

Mail-in ballots are expected to play a key role in the election as voters and elections officials seek alternatives to gathering at polling places during the pandemic.

A spokesman for the Postal Service did not immediately return a request for comment on Monday.